This summer, I’m going to make playlists and write about them. Here is the second entry about a series of tracks of I’m calling “Lovestuck.” If you’d like to read the posts in order of how the songs appear on the playlist, start here. Hope you enjoy. 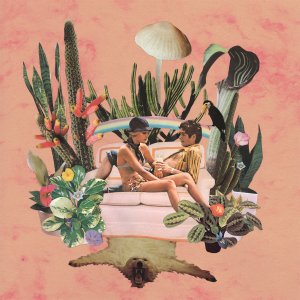 From the beaches of California, we travel to the non-place of exotica. Adjacent to Mike Love’s longing for escape through suggestive nostalgia, the nostalgia of Monster Rally is quite literal, constructed through producer Ted Feighen’s sampling of his “collection of [old] records, combining his interests in Hip-hop, Exotica, Tropicalia, and Soul.” From this combination, exotica has always stood out to me. Birthed from a 1957 album by Martin Denny, virtual record store Hip Wax calls exotica “a narrow slice of popular music or mood jazz, means very specifically tropical ersatz: the non-native, inauthentic experience of Oceania (Polynesia, Melanesia, Micronesia, and Southeast Asia).” Inauthentic is a key word here. Musicologist Phil Ford says exotica “sounds like movie music without the movie,” and without the the movie, there are no images to anchor the imagination, no real setting or people through which to trace the sounds. Now, we can look up the sites of appropriation, finding the roots of exotica’s “variety of instruments: conga, bongos, vibes, Indonesian and Burmese gongs, boo bams (bamboo sticks), Tahitian log, Chinese bell tree and Japanese kotos.” When first produced, however, Ford poses exotica as an invitation into the colonial white imagination, a place that can “conspire to make a kind of ethnographic pulp fiction” if not checked. It is the poison of vagueness when speaking of cultures with real people with real histories. It is the power of self-soothing delusion in music form. All brightly colored and warm as a bottle of spray-tan.

How to handle the pleasure I get when listening to Monster Rally, or even one of the original exotica offenders like Les Baxter, I do not know. How to curb the need to escape into fantasy when it feels as if the world is getting smaller. The saccharine siren song of this particular exotica is cut with actual tropicalia and hip hop beats, so at least it’s pulled from its original othering context, distorted, dressed up new. At least its collage is visible, I tell myself, and it doesn’t pretend to be a singular truth about the non-Western world. Those who needed no erzatz for tropical places made exotica music, too. Take the work of Yma Sumac, born Zoila Augusta Emperatriz Chávarri del Castillo, a Peruvian colorotura soprano.

I was once in love with a man who was obsessed with the music of Les Baxter. Seems fitting the love was unrequited. Now whenever I play “Cherry Blossoms” or anything other exotica-inspired tunes, I try to stay put, let the track weave through where I am. Let us repurpose and make the world out of the ceiling. This is the soundtrack for drifting and touching things absently, not being afraid to turn a carpeted floor into a dance floor. My friend told me that lately she realized she hasn’t stared off into space so much since she was a child. Me either, I told her. Newness can be achieved through stillness. I never knew how many things in my very own house have a texture. A smell. A sound.