Among the list of Questionable Habits I have been chipping away at for the past few years is the tendency to stage a dramatic breakup with the places I call home. A few months or weeks before I’m set for departure, I will begin cataloging perceived flaws of my living situation, incompatibilities with the city or neighborhood, sites of friction between who I want to be and what the surrounding community has to offer me. Sometimes, the stories told to motivate these transitions are true: “I just want to live somewhere habitable,” I said as I left the bedbug-ridden, smoke-choked apartment complex in Stevens Square. Seems fair. Or later, after I was sexually harassed and groped next to my bus stop on North Broadway, I was ready to move somewhere where that didn’t happen so much. Also fair.

But there were other times when I was in pain, or unsettled, or just plain bored, and I splashed my discomfort onto my surroundings for no good reason. No good reason except I was wounded, and scared, and broke. Maybe moving felt like a way to be mobile when I felt trapped by my financial circumstances. Without realizing it, I was straight up chewing and swallowing the cliche of “you can never escape yourself,” dipped, of course, in the irony that moving is really expensive. At 21, I left a fully furnished $275/month bedroom in a house full of kind, cornfed college boys for roach-hotel floors and scratchy couches halfway across the country in New York. Two years after that, I left a wood-floored apartment on a tree-lined street, complete with a balcony and dishwasher, because Saint Paul had “too many families.” When I was 26, I left a whimsical, high-ceiling-ed room in a refurbished mansion after a year of living there because I was “tired of the Uptown hipsters.” I moved every single year of my twenties, except for twenty-nine. According to one story I told about that first cheap apartment in Lawrence, things were “too slow.” I wanted to be a writer, and in order to do that, I couldn’t sit around, killing mosquitoes on the porches of my childhood friends, working the counter at a burrito place. Now, that’s all I want to do. I want to be a permanent fixture. I want to know a place so well, I notice the slightest change in my surroundings. New checker. New addition to a neighbor’s garden. New spiders. Sometimes I worry that this desire to be permanent is only one of many novel desires (I’ve never wanted permanence before), and my desire for permanence won’t be permanent, after all. We’ll just have to see.

Leaving Minnesota in 2017, I was more careful to give thanks as I said goodbye. I knew I was doing the right thing, but for the first time I wasn’t belly flopping into the next phase. My life in the Twin Cities had been complicated and rich and heartbreaking, and the state spoiled me rotten with amenities. I took a long time to say goodbye to the cool mossy lakes and big fat bike lanes and glittering frost. The corny yellow trains and long, wild nights and backyard fires. It was not a perfect place, but it was a good place for me for a while.

Oxford. F**king Oxford. I hated it within a month of living here. If you know me, you’ve heard the list of things I hate. Everyone drives. People talk at grown women like they’re toddlers in a beauty pageant. You can’t walk anywhere without the sidewalk ending or a truck with NRA stickers revving at you threateningly. Starts and ends with the residents aged 18-24 who are going the same weird, selfish phases that I went through, but are doing it with double-parked Range Rovers, unironic Reagan Bush t-shirts, racist Snapchat filters for their Greek events, and an open disdain for the very values that allow them to cheat their way through a Marketing degree. “Socialism Sucks” is a popular sticker I see on laptops here. At the willing blindness of parading that mindset in an institution literally funded on the collective backs of taxpayers, I bite my tongue. It’s not like these people didn’t exist in New York or Minnesota. There’s just a higher percentage of them here, and the city’s infrastructure, its policies, the very social fabric of this community is built around their whims and the whims of their parents. Their parents are oil barons and old money factory owners with slave-owning ancestors, who fly to Atlanta for plastic surgery, who keep condos in Oxford stocked with Tito’s for football weekends where they drink with their spray-tanned children until they’re red in the face, ready to descend on public spaces, shouting slurs at anyone who doesn’t conform to their idea of personhood (read: white, wearing gendered clothing), ready to relive the antebellum glory they never knew. The next day, they begin again at 8:00 am, eating shrimp and drinking overpriced cocktails on balconies until the sun sets, at which point they go into the local bookstore, asking for Tami Lahren’s autobiography (is that how to spell it? I’m not going to Google her name). None of this is exaggeration; all of this I’ve witnessed over the past three years. I hate it here. Not everyone is like this, but the majority are, and too many forgive them. I never will, even though I don’t know the worst of it. I hate it here. I will say it until I’ve pulled my U-Haul across the county line, and then I will never think of it again. (I wish.) I hate it here.

I started writing this post before the streets and the grocery stores emptied. Oxford without its people is usually the best Oxford. Now, the quiet is a little stranger. Now, you can walk everywhere. My plan for this post was to focus on the things I would miss about this place, to give thanks for what the good parts have given me. Those parts have abruptly changed, and will continue to change, in the aftermath of coronavirus precautions.

The Oxford Canteen would have top of my list of places I would miss, the restaurant where I’ve staffed the counter for three years. But we had to close. Listing its wonderful qualities seems too much like a eulogy right now. I’ll come back to it.

The second would be the Whirlpool Trails, where I run, but I stopped running outside. Being out is still allowed here, but I began to want every moment I spent out of my apartment to be calming and slow and spontaneous. I can take the world for what it is a little easier when I’m not panting to house music. So I do workout videos inside; my favorites feature some very fit New Zealanders who come with my membership to the YMCA. You haven’t lived until someone yells keek, keek, uppah-cut at you while they float through a Peter Jackson-esque green screen landscapes.

Sometimes the main walking paths are too straight for my anxiety, too narrow, too many people there. I like to dip and scurry through lonely routes in my neighborhood, between graves in Faulkner’s cemetery, through the overgrown lot where they said they were going to build a church but never did, up the back stairs, under the canopy, behind the Lamar House.

The birds are so loud lately. The air is so wet and fresh. The lilacs are blooming. I saw a fox. Twice! Here are some photos from my walks: 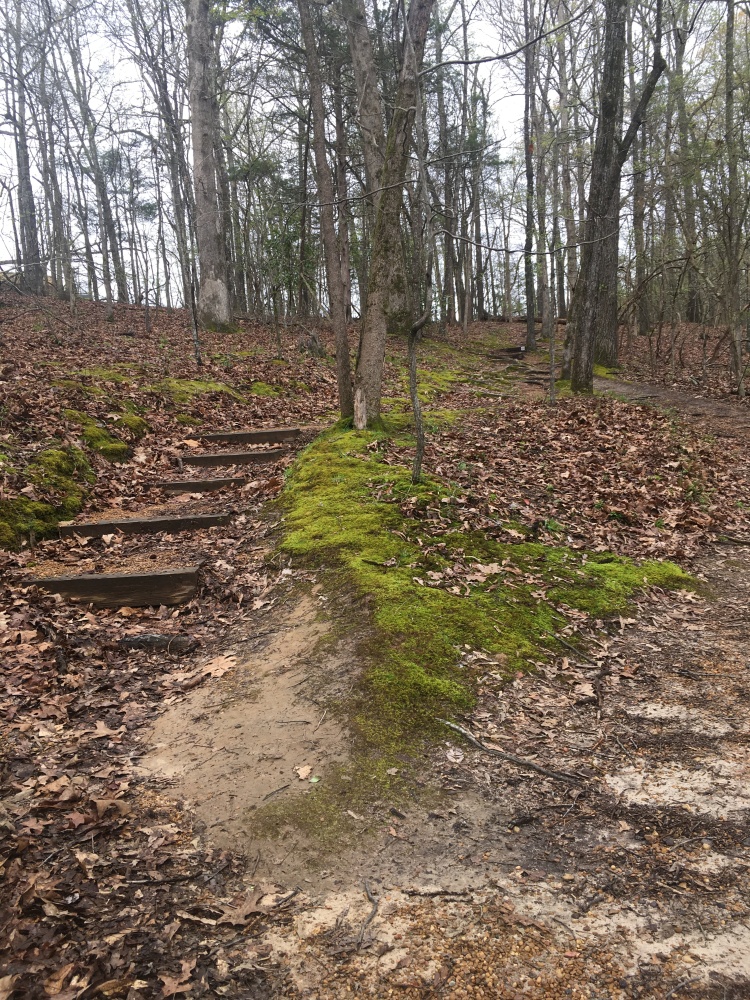 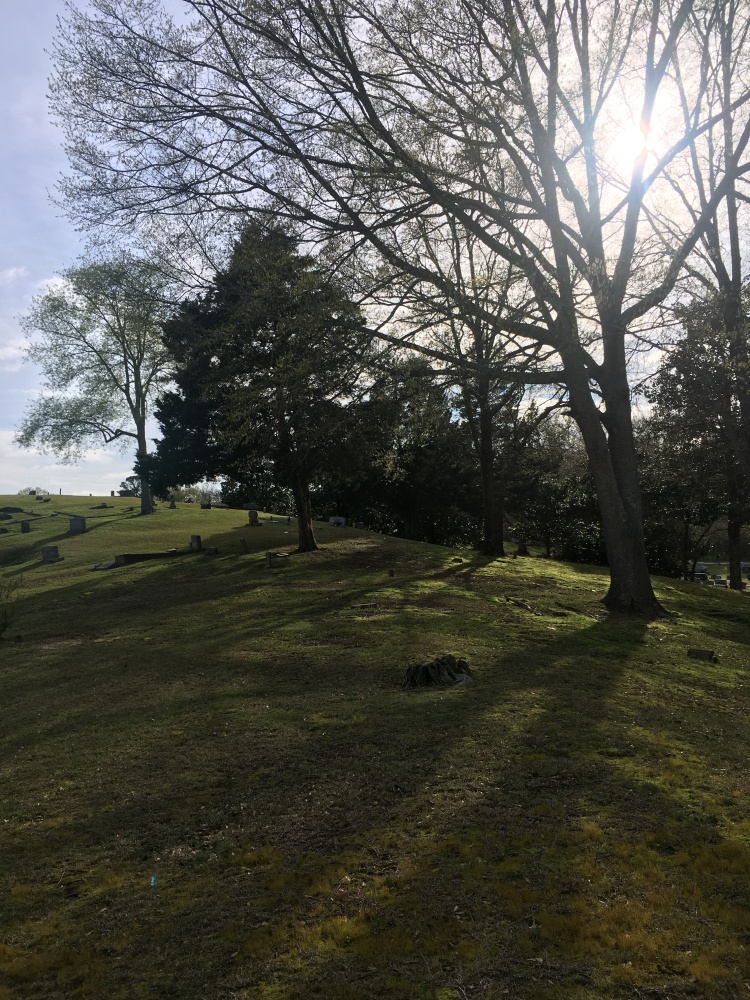 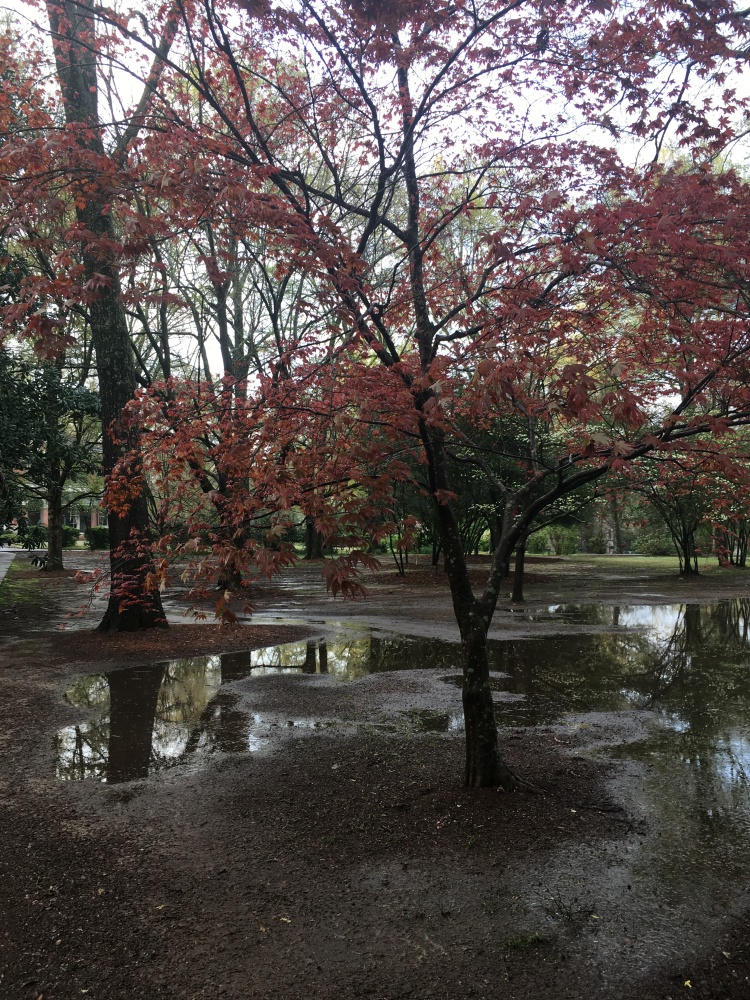 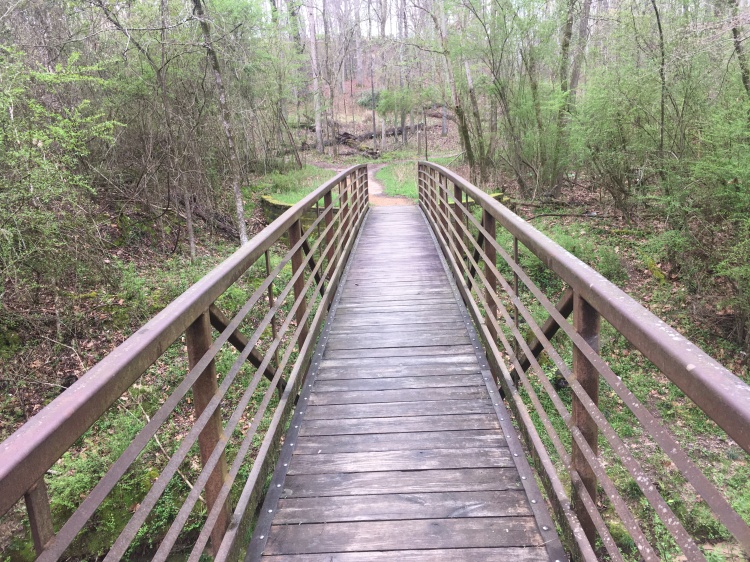 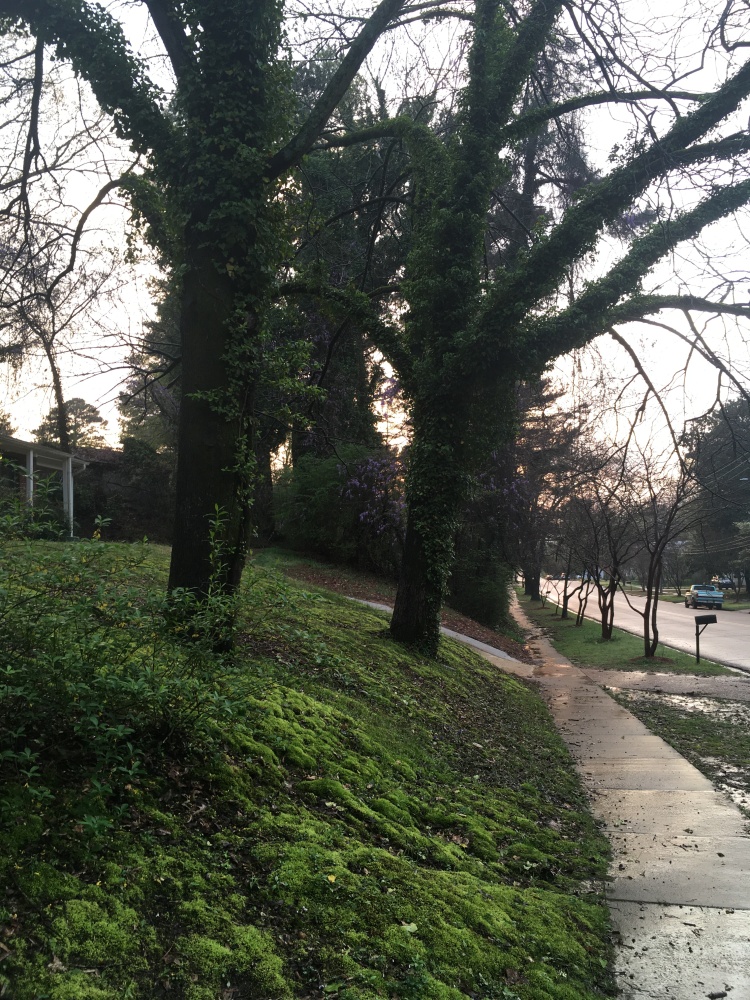 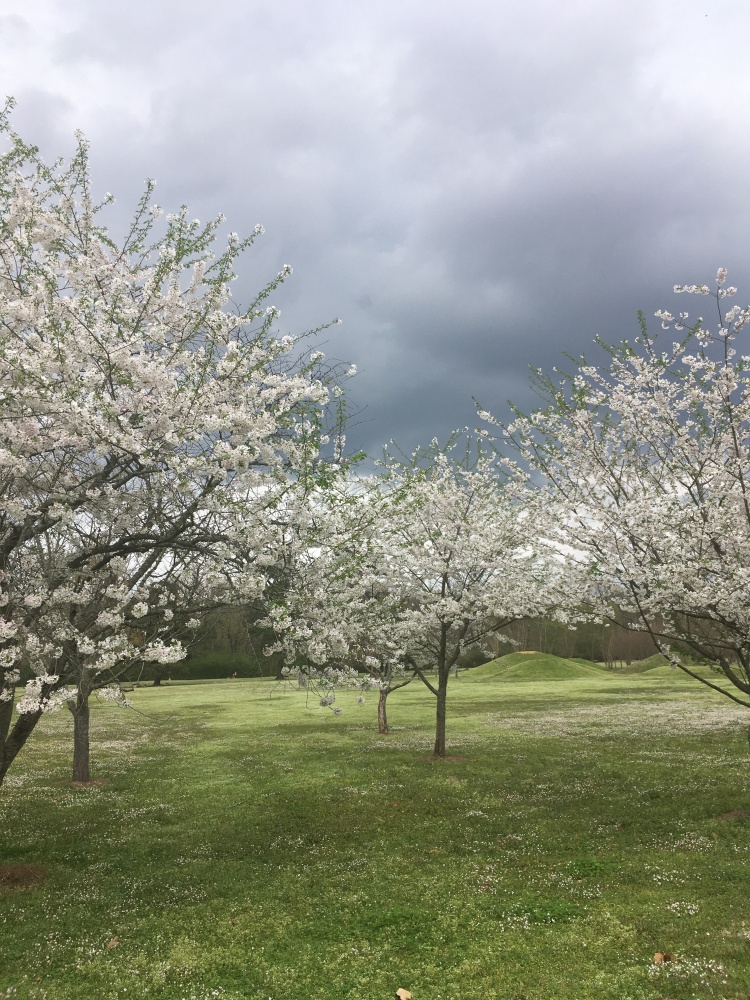 Sometimes I don’t hate it here.